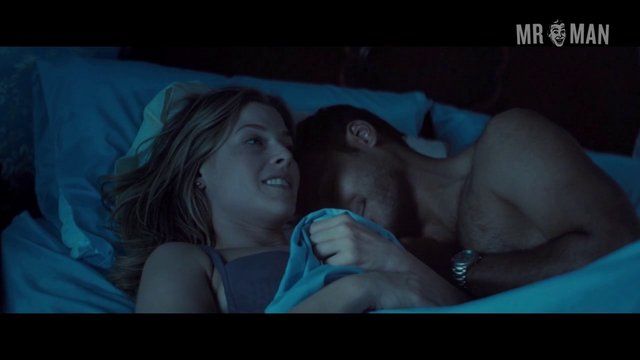 The Diabolical (2015)
Sexy, straight, shirtless 00:27:29 Arjun Gupta is scruffy, fuzzy, and all around delicious as he gets out of bed next to Ali.
advertisement

Sometimes the going gets tough with things like being a single mother with two children, and the looming fear of declaring bankruptcy. And sometimes the going gets even tougher when the house you moved your children into turns out to be haunted by two bizarre looking ghosts. If those two sentences have you on the edge of your seat, The Diabolical (2015) is the horror movie for you. Writer/director Alistair Legrand's first film is in some ways reminiscent of The Amityville Horror (1979), except it doesn't claim to be a true story, and you can actually see the spirits. The spirits aren't the only things you can see, you'll also catch a glimpse of the shirtless fuzzball Arjun Gupta. You'll want to grab a cup of Gupta when you see him getting down and dirty with Ali Larter. We'd love to trade places with Larter, this scene is a real fire-starter. They all learn pretty quickly that they cannot leave the house while these ghosts are around - possibly a money-saving technique from the filmmakers - so with 'flight' off the table, the only remaining option is 'fight.' The Diabolical doesn't waste time getting to the scary parts, and if you've got a hankering for Arjun Gupta, you're in good hands.