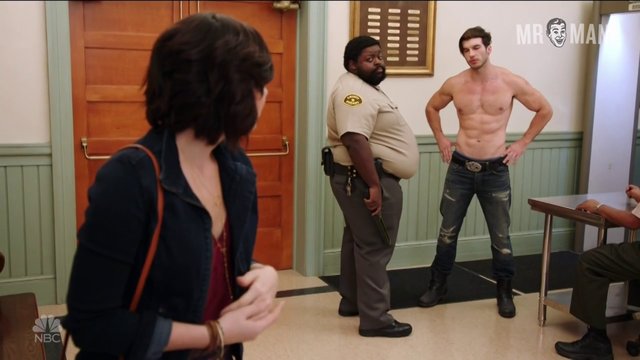 Trial & Error is not a belated television adaptation of the notorious Michael Richards vehicle of the same name from the late 90s, but rather a sitcom that debuted on NBC in the Spring of 2017. The entire premise of the series is a spoof of the well worn legal docu-style courtroom dramas of the last two decades. John Lithgow stars as a beloved South Carolina college professor accused of murdering his wife. He hires Josh Segal (Nicholas D'Agosto), an ambitious New York City lawyer to represent him in the case being brought by prosecuting attorney Carol Anne Keane (Jayma Mays). Since this is a network sitcom, don't expect a ton of skin, though we do get a sexy scene in episode 8 where Adam Hagenbuch asks to borrow his girlfriend's shirt when they won't allow him into the courtroom shirtless!