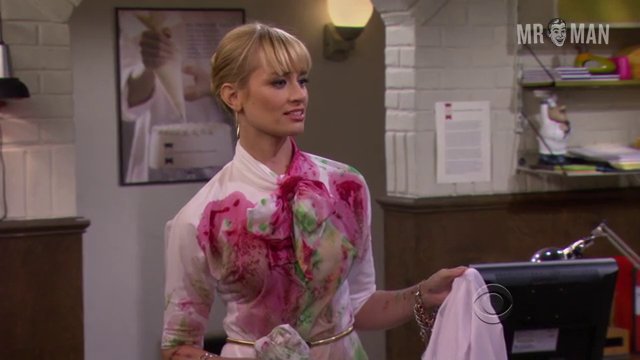 There’s a new Odd Couple in town, but instead of casting crotchety old men, 2 Broke Girls features the on screen talents of sassy young waitresses. Streetwise Max Black (Kat Dennings) is working the night shift at a retro diner to pay her bills when she gets saddled with a new trainee, poor little rich girl Caroline (Beth Behrs). Caroline has been forced to get a working class job after her father got caught operating a Ponzi scheme and her trust fund went bust. At first it seems that these two luscious ladies have nothing in common except the ability to look great in a skimpy waitress uniform, but soon they realize that they are the perfect yin and yang, and formulate a plan to start their own cupcake business. Even though it’s a primetime show, we still get some tasty tidbits from the men of 2 Broke Girls. Starting in Season 3, episode 13, super cute comedian Eric André strips to his underwear to jump out the window. In episode 15, Eric gets shirtless again as he emerges from his dumpster home.

In episode 16, the alluring Mr. André bares his sexy naked while trying to seduce Kat Dennings in her bed. In episode 10, the gorgeous Gilles Marini gives an abtastic performance as a chef going wild in the kitchen. Your loins will be swelling and perspiring when you grab a glance of Gilles!

Season 4 brings us some tasty nudity from the amazing Austin Falk.  In episode 19, Austin gets hosed down while shirtless for a photo shoot. In episode 20, Austin brings the bulge when he shows off his bodacious bod in just some tight little undies. Season 5 is arguably the sexiest season. In episode 6 the juicy Jonathan Kite shows off his hot, hairy bod while working it in some short shorts. The captivating Corey Allen Kotler shows off some fantastic fuzz when he opens the door in his undies in episode 10. The mesmerizing Matthew Moy gets pantsed by a goat in episode 14 and then the erotic Ed Quinn struts his muscular bod around in just a towel episode 16. Ed shows off his fit figure again in episode 18. Ed puts those perfect pecs on display again in episode 22 while lying in bed. Ed brings that hot, hard bod to season 6 when he strips for TSA in episode 6. These are 2 lucky broke girls!