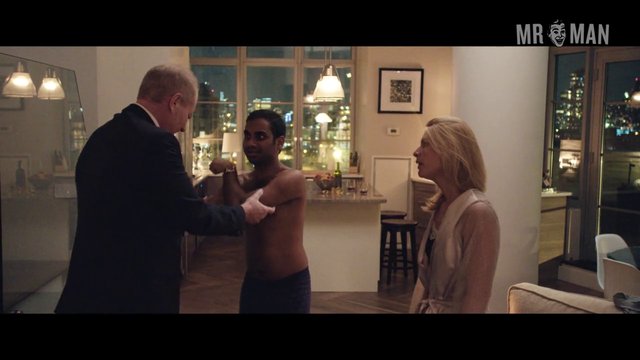 Comedian Aziz Ansari writes, directs, and stars in Master of None (2015 - ) a comedy about a 30-year-old first generation American named Dev who lives in New York. Dev tries to balance his life as a struggling actor with spending time with his friends and still holding on to the traditions of his Indian family who aren’t terribly supportive of his partying, fun-loving lifestyle that doesn’t appear to have marriage, success or children anywhere in its future.

Aziz gets his freak on with Claire Danes in a funny, skintastic scene. The two are kissing on the couch when Aziz takes off his shirt. Claire’s husband suddenly comes home leaving Aziz hiding in the closet wearing nothing but his boxers. We get a nice long look at the funny man’s body when he is discovered and confronted by the angry husband.