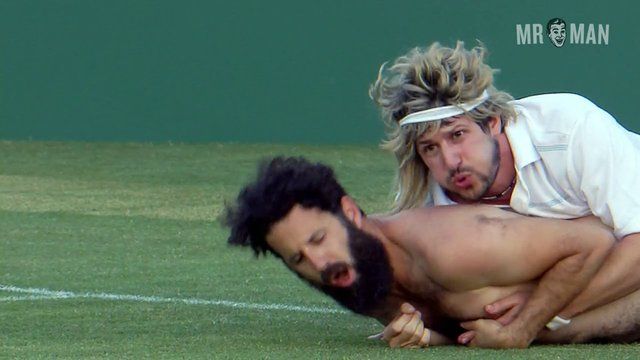 The satirical HBO original mockumentary 7 Days in Hell (2015) stars hunky Kit Harington and goofy Andy Samberg as fictional tennis rivals. Set during 2001's Wimbledon, nice but dumb Charles Poole (Harington) and cocksure Aaron Williams (Samberg) square off in what turns out to be a seven day final match, told in faux-documentary style with talking head interviews with a litany of "experts" played by Will Forte and Fred Armisen, along with plenty of other hilarious antics. In the film's funniest—and sexiest—scene, a streaker played by Chris Romano runs onto the court fully nude and proceeds to get banged by Samberg, who then initiates a threesome with a female streaker! Even Harington gets in on the action, sporting a fake boner while watching the rendezvous, and there's also some uncredited ballsac nudity in the film as well!