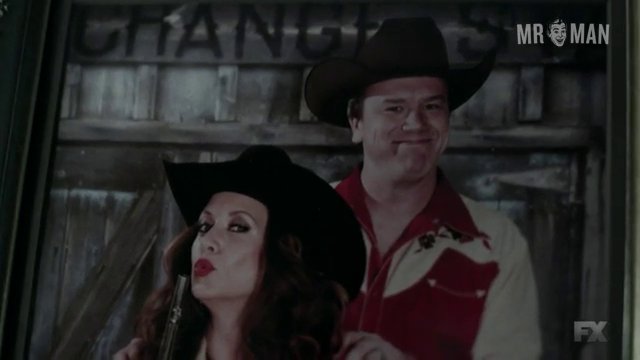 Inspired by the amazing Coen brothers’ 1996 film of the same name, the ten-part television series Fargo stars Billy Bob Thornton as Lorne Malvo, a menacing drifter that comes to the small Minnesota town of Bemidji, and crosses paths with Lester Nygaard (Martin Freeman), a dull and clumsy insurance salesman taunted by his wife who often wonders why she married him, belittled by a successful younger brother, and still picked on by Sam (Kevin O’Grady), a bully from high school. Lester’s life changes as Lorne reminds him that he’s been spending too much of his life thinking about the rules, and ultimately sets off the murderous rage that’s been pent up inside of him for quite some time. Episode one of the series gave us a look at Kevin O’Grady’s butt as he bangs a stripper. We get some sexy shirtless action from David Trimble, Oliver Platt, Jesse Plemons, and Bokeem Woodbine throughout this series. British babe Martin Freeman gets sexy and shows off his O-face in season one, episode seven when he goes to town doggy style with a lucky lady. Our other favorite scene is in season three, episode one when sexy Scot Ewan McGregor shows off his tight tush when he hops out of the bathtub. Fargo will have you going crazy…with yourself!