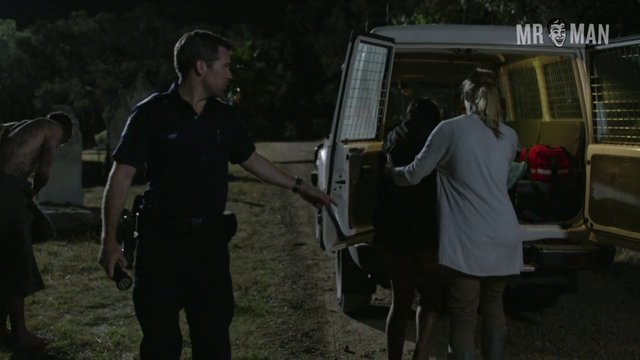 Glitch (2015-)
Nude, shirtless, butt Ep. 01x01 | 00:06:30 Sean Keenan covers his bits as he walks naked over to the police. James Monarski comes out of the woods, baring his backside.
advertisement

Glitch is an Australian television series that puts a spin on the heavily saturated Zombie genre by depicting its six undead subjects not as lumbering, reanimated lugs, but as their old selves in perfect health, though understandably shaken and confused. Oh, and they're naked too! One wonders why exactly. Are corpses buried naked in Australia? But one look at the likes of Sean Keenan, Ned Dennehy, Rodger Corser, and James Monarski all showing off their reborn bums while covered in mud is enough to shut up any nagging questions of logic. When they're discovered along with some grave escaping gals, Senior Constable James Hayes, a police officer in the small town of Yoorana, calls for help and brings them back to civilization whether they're ready for it or not. These back-from-the-abyss blokes don't get nearly as naked after Episode Two but we do get some shirtless appearances from Corser as well as Patrick Brammai in Episode Three and Matt Testro in Episode 4. All these naked dead dudes rising from the ground may indeed be a glitch, but we're happy it involved so much bum baring in the process.