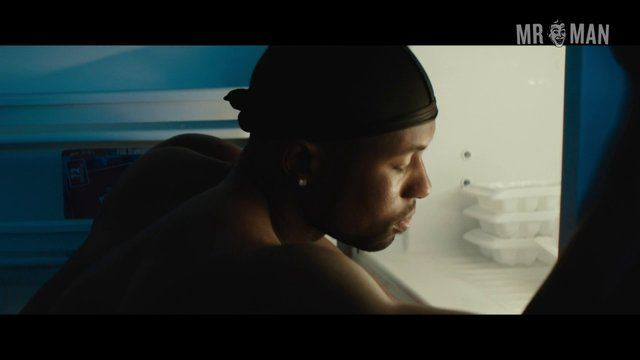 Moonlight (2016)
Sexy, shirtless 01:10:24 Trevante Rhodes lies shirtless in bed, showing off chiseled abs while he dreams, while we dream of him.
advertisement

Moonlight is a 2016 indie hit that took Hollywood by storm, eventually nabbing the Best Picture trophy at the 89th Annual Academy Awards. The moving drama follows a young gay boy on his challenging, heartbreaking, and most importantly, entirely believable journey to understanding and possibly embracing his sexuality. Chiron is portrayed by three different actors, each tackling his experiences at different ages. Alex Hibbert plays Chiron as an outcast child, Ashton Sanders is the sexually curious teen, and finally, Trevante Rhodes portrays Chiron as a guarded, repressed adult.

Chiron's life as a child is defined by his absentee mother and schoolyard bullying, as the kids refer to him as "Little." A perceptive drug dealer, Juan (Mahershala Ali), takes an interest in Chiron's life and lets him know that it's okay to be gay. This sentiment plays out when Chiron (as played by Sanders) has a chance to get down and dirty with his childhood friend Kevin (Jharrel Jerome) on the beach (more about that in a second!) However, the joy of sexual validation dissipated when Kevin refuses to acknowledge their time together.

A hurt and confused Chiron decides to repress this part of his life completely, and grows up to become a hulking drug dealer - an identity that has little resemblance to the Chiron we met as a child. After finally confronting Kevin about their gay ol' time together all those years ago, we have hope that Chiron (now played by Rhodes) might be able to connect with his homosexy identity.