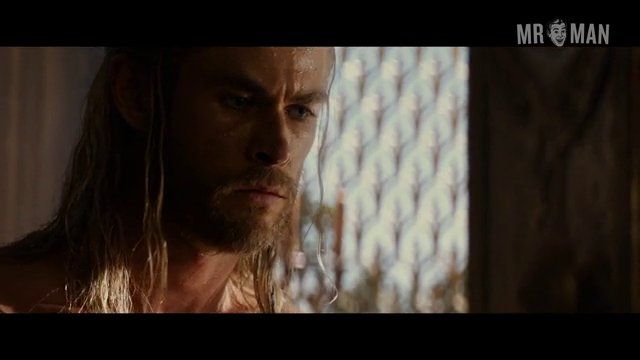 Thor: The Dark World (2013)
Sexy, shirtless Even superheroes have to clean up, and Chris cleans up nicely sans shirt.
advertisement

The Mighty Thor (Chris Hemsworth)---Marvel Comic’s sexy, long haired, hammer-swinging super hero---is back in another epic battle to save Earth and all its Nine Realms from Malekith (Christopher Eccleston), a bizarre and devious enemy that actually predates the universe in Thor: The Dark World (2013). When the Nine Realms start heading towards a rare ailment, and against his father’s (Anthony Hopkins) wishes, Thor heads down to Earth and do some epic battling. Of course, he re-unites with Jane (Natalie Portman), who, while investigating rips in reality, ends up dosed with Aether, a potent anomaly that Malekith needs to help destroy the planet. This job is too big for Thor, so he must team up with his evil and jealous brother Loki (Tom Hiddleston), who also tried to destroy the planet in the previous installment of the franchise, to save Earth. Chris Hemsworth saves us from comic book boredom as he loses his Asgarding gear, flaunting his chiseled physique. Chris can put a Thorn in Mr. Man’s (back) side anytime he wants!