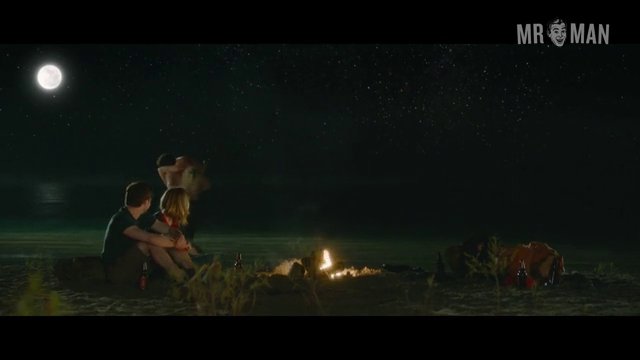 Being friends has its benefits in the romantic drama What If (2013). When med school drop out Wallace (Daniel Radcliffe) discovers that his gal pal is having an affair with his Anatomy professor, he swears off of social engagements for a year. But his friend Allan (Adam Driver) won’t let him sulk in peace—he drags him and his downer-like behavior to a party, where he winds up in the kitchen fiddling with word magnets on the ‘frig. While most would run from magnet-manipulating milksop, Allan’s wisecracking cousin Chantry (Zoe Kazan) successfully engages him in conversation. Even though Wallace and Chantry immediately hit it off, it seems as though his kitchen-cozy pal has a longtime boyfriend (Rafe Spall), leaving Wallace meandering in the dreaded friend zone. But we all know that friends of the opposite sex that hang together, eventually play together. During a late-night skinny dip with Chantry, Radcliffe bares his buns in the moonlight as he sprints into the lake to splash around with his friend. On the way out, he teases a look at his sack as he attempts to cover his good parts with fallen foliage. Not to be forgotten, Driver also manages to reveal a look at his rumpage. Mr. Man is left asking himself, What If Radcliffe and Driver got completely nude. That would put us in the self-fornicating zone!