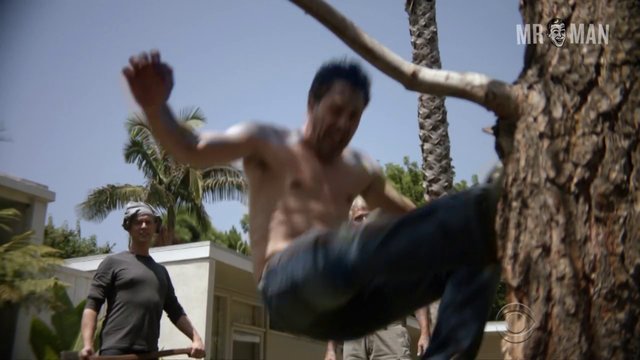 Life In Pieces (2015-2018)
Sexy, shirtless Ep. 01x03 | 00:23:37 A shirtless James Brolin, Colin Hanks, and Thomas Sadoski cut down a tree while an equally shirtless Dan Bakkedahl watches the action from the shower!
advertisement

Life in Pieces is CBS’s stab at creating an edgy sitcom meant to mimic the successes of popular family fare such as ABC’s Modern Family. Luckily the often-conservative network gave themselves a lot to work with by casting some of the most seasoned actors in the business including James Brolin, Dianne Wiest, Betsy Brandt, Thomas Sadoski, and Colin Hanks. The show dissects a family’s idiosyncrasies through the eyes of each of its members, crafting a non-linear storyline that cumulates into a cohesive representation of the quirky crew.

As soon as we mentioned some of the men in Life in Pieces, we’re sure you perked up a little. After all, James Brolin is one of the hottest seasoned actors out there, and the younger Thomas Sadoski and Colin Hanks are just as dreamy as ever. The sitcom understands the sexiness of its main men, and gives us a hot scene that sees the fellas working their balls off to cut down a tree in the front yard. It takes a mighty body to make such a mundane task so sexy, and the shirtless Thomas and James do the trick!