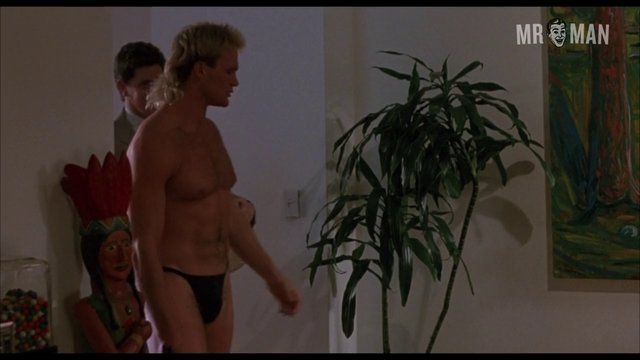 Former football player Brian Bosworth made his move to the big screen in Stone Cold (1991) an action crime drama about an FBI agent who has been forced into an ugly situation. Bosworth plays Joe Huff, an FBI agent who is very good at infiltrating biker gangs. When he is blackmailed into working a specific case he must put his life on the line to capture some very violent, angry bikers who have declared war on the FBI.

Mr. Bosworth gives us our eye's worth of man-skin when he pulls off his shirt and gets in a fight with another big biker. The Boz, shows off that fine frame as he trades punches. We get a better look at his body when he answers the door wearing just a skimpy pair of underwear. There is a quick view of his ass and more of that fine upper body as he walks through the house. Lance Henricksen plays one of the lead bikers. We see him shirtless as he sits on his motorcycle and talks to another biker.