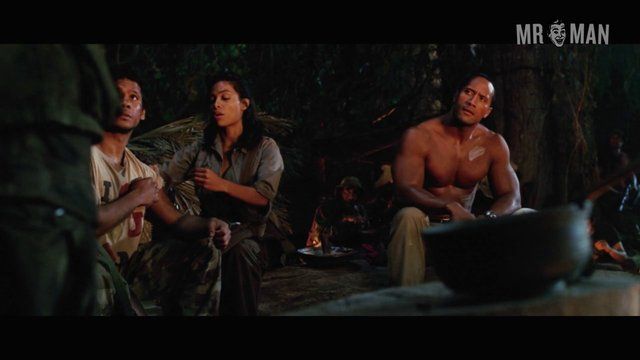 The Rundown (2003)
Sexy, shirtless 00:49:22 Dwayne Johnson shows off his rock hard body when he does some fireside stripping in the jungle.
advertisement

A bounty hunter turned professional chef is brought out of retirement to find a mobster’s son in The Rundown (2003). Beck (Dwayne Johnson) is a former bounty hunter who, much against his will, finds himself going to the Amazon in an effort to capture and return a mobster’s son, Travis (Seann William Scott). When Beck finds Travis he learns that he is not the bad guy his father makes him out to be and soon finds himself pulled into an adventure that has them trying to outrun various bad guys while hunting for lost gold.

Both Seann and Dwayne give us the shirtless treatment. Seann goes first pulling off his shirt and going for a swim in a river then later by a fire Dwayne relaxes shirtless while talking about boxing. Both guys are in great shape and look fantastic shirtless.