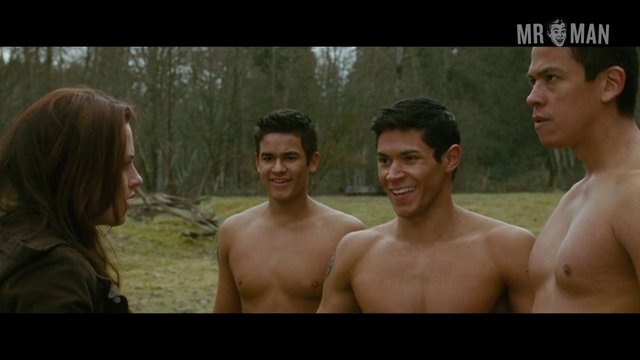 The Twilight Saga: New Moon (2009) is the second film in the hit movie franchise that got teens and their moms all hot and bothered under the collar due to its chaste vampires and subtext of abuse and control. All five films, and the four books they're based on, are abstinence parables written by a Mormon housewife, so keep that in mind. Having said all that, there is plenty of sensational shirtlessness in these flicks, but this one takes the cake. If you just watch the clips without watching the film, it looks like a film about Taylor Lautner going to various locations to try and track down where he left his shirt. In fact, he's not the only one searching for his shirt, as beefcakes Alex Meraz, Bronson Pelletier, Chaske Spencer, and Kiowa Gordon also look they just wandered in from an Abercrombie photo shoot, and left their shirts behind. Even Robert Pattinson can't resist the allure of going shirtless, doffing his top and letting his pasty vampire physique sparkle! We hope none of these guys ever find their shirts.