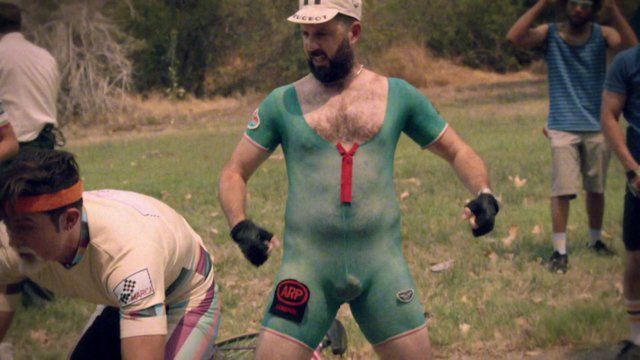 This movie is dope. Literally! The oddball comedy Tour De Pharmacy paints the competitive cycling world as a place where doping is as ubiquitous as sexy guys in tight spandex. Not much of a... stretch... if you ask us! The mockumentary format - narrated by none other than Jon Hamm - introduces us to the only five racers left after a doping scandal disqualifies all other competitors. The comedic minds behind Tour De Pharmacy - which previously came together for 2015 Mr. Man fav 7 Days in Hell - heap absurdity upon absurdity as the five men scheme various ways in which to come out victorious.

Here at Mr. Man our drug of choice is dudity, and thankfully Tour De Pharmacy provides a lethal amount of it! Chris Romano is back after his 7 Days in Hell nudity to go full frontal while wrestling John Cena! Hilarious hottie Andy Samberg, A-list superstar Orlando Bloom, and the divine Daveed Diggs join in for some sexy shirtless action. Tour De France? We'd rather take a Tour De Pants!