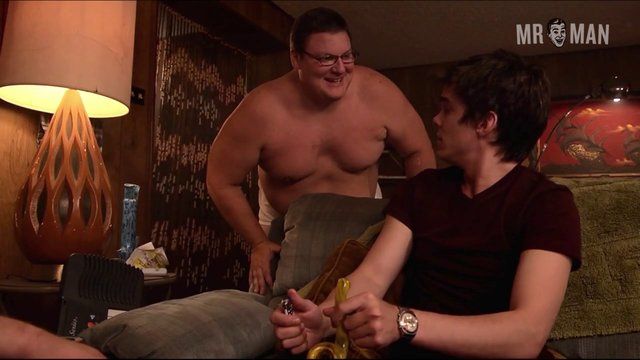 Boris Wexler’s raunchy comedy American Slice (2014) (also known as Roundabout American) tells the story of a young French chef who lands in Chicago and converts an old pizza shop into the hub for an escort service for very wealthy clientele. Some things go right, a lot of things go wrong, and there are plenty of laughs along the way in this very low budget feature. There’s also plenty of man meat to feast your eyes on along the way—albeit no actual sausage—and you’ll certainly have your fill by the end. Husky hottie Howie Johnson appears in multiple scenes in nothing but his tighty whities, showing off the rest of his sexy, hulking body. Edouard Giard joins in on the fun at one point, too, giving us a hot look at his toned, shirtless upper body while he lies in bed with a young woman, which is enough leave us hot ‘n ready ourselves!