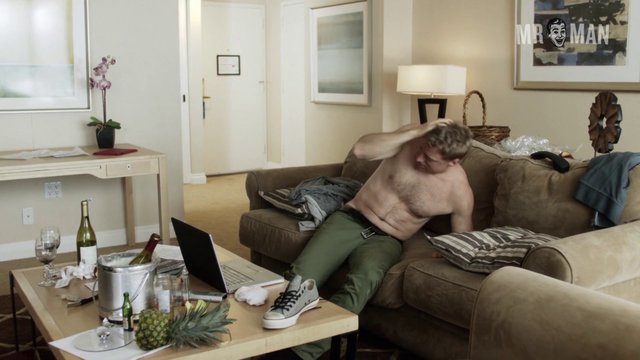 Web series Con Man is like Galaxy Quest (1999), but in bit-sized chunks! The show is Vimeo’s foray into original programming, and stars Alan Tudyk as Wray Nerely, a former actor on a hit sci-fi series set in space, akin to Star Trek, called Spectrum. While Alan’s career post Spectrum’s cancellation consists of traveling to science fiction shows to reprise his character, his co-star Jack Moore (Nathan Fillion) is now a bona fide A-lister, and Con Man follows Wray as he navigates his own ideas of success, and eventually learns to accept and love his avid fans. Alan Tudyk will always be a success in our eyes, especially since he has a hard, solid bod and the sexiest blonde fuzz you could imagine! Man gives us plenty of opportunities to check out the hunk shirtless, and even affords a look at his sexy bulge. Never give up, always surrender to Alan!