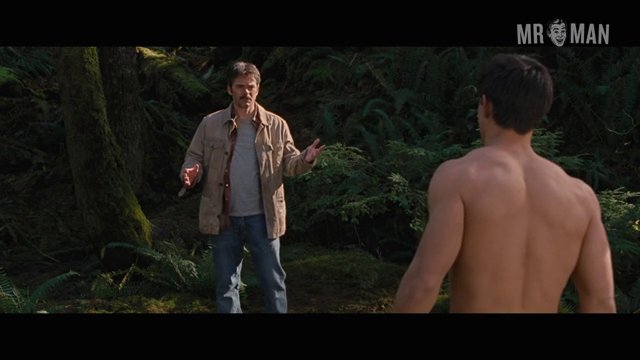 The Twilight Saga: Breaking Dawn - Part 2 (2012)
Sexy, underwear, shirtless 00:21:27 Taylor strips down to show off his abs and pecs and werewolf-changing abilities to his buddy.

The fifth and final installment of the insanely popular young adult book series The Twilight Saga: Breaking Dawn – Part 2 (2012) brings back the lovers Edward and Bella (Robert Pattinson and Kristen Stewart) for one more cinematic adventure. After being brought back from near-death by Edward after childbirth, Bella begins her new existence as a vampire and a mother to her daughter, Renesmee. Resisting the urge to feed off of humans, the vampire mommy finds herself indulging in the blood of wild animals. Of course the family can’t get any peace and quiet, especially when the Volturi continue their hateful ways and, led by Irina (Maggie Grace), the newest vampiric threat, set out to kill Renesmee and the Cullens. To make matters worse Jacob (Taylor Lautner) always seems to be lurking around, even imprinting (read the book) himself on the vampire couple’s kid. The Cullens must team up with other vampires from around the world to defeat Irina and the Volturi clan. With a PG-13 rating hanging over the film, the best we can muster is an ab-tastic view of Taylor Lautner as he strips down to show off his wolfish transformation skills. Also, Robert Pattinson adds a dash of shirtless steaminess as he gets romantic and talky with Stewart as they lounge next to a fire. Never thought a werewolf and a vampire could be so sexy!