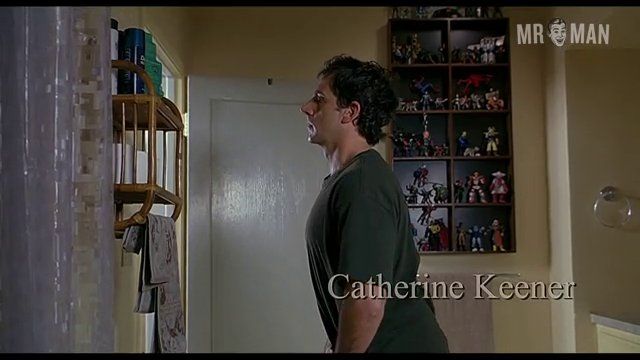 The 40 Year Old Virgin (2005)
Sexy, underwear, prosthetic, erect 00:00:52 Steve Carell wakes up with some massive morning wood. It's a prosthetic, so don't get too excited.

The title says it all. Steve Carell stars in this Judd Apatow film as Andy, a man who, after some unfortunate forays into the bedroom has given up trying to get the virginal monkey off his back. He’s fine with his video games, action figures, and framed Asia poster. When his “affliction" is discovered by his motley crew of co-workers, they set about trying to rid Andy of his man cherry. His friends try all manners of coaching including hiring a “professional” with disastrous results. Andy starts dating a woman who suggests waiting until their 20th date to have sex, which he readily agrees to. Will they or won't they? This is the question that runs throughout the hilarious countdown to date number twenty. For a movie built around sex, there isn’t a lot of it, but we do get some great looks at Steve Carell's sexy hairy bod, as well as Paul Rudd's gorgous rump as he broadcasts his broadside on television!